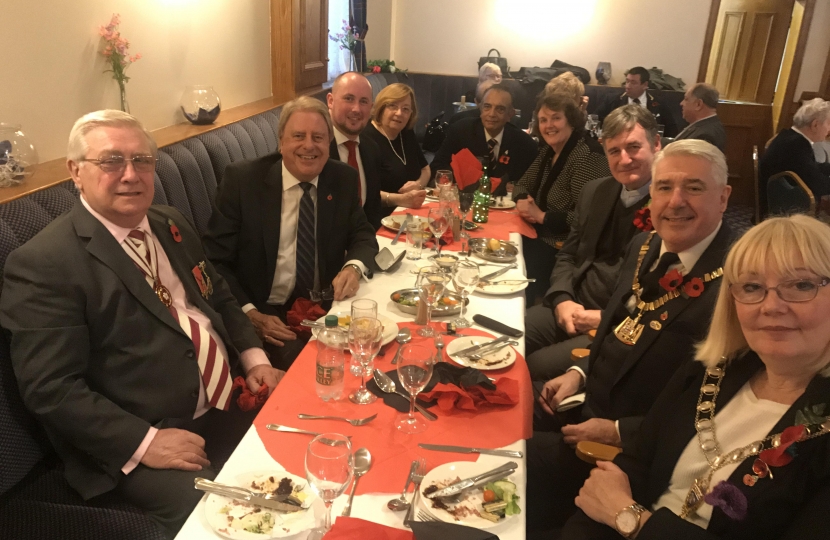 Rt Hon Sir David Evennett MP was the guest of honour and speaker at an Armistice and Remembrance Commemoration Luncheon held at the Bexleyheath Conservative Club on Sunday (11 November).

Sir David spoke about his Grandfathers who both served their country during World War 1, and about how important it was to commemorate and remember the sacrifice, bravery and suffering of those who served and gave their lives to safeguard our freedom and independence.

He spoke about his time as the Minister responsible for the Jutland and Somme commemorations in the summer of 2016, and the moving ceremonies that had taken place at Thiepval and in the Orkneys.

Sir David commented: “we must never forget our heroes, and at the centenary of the end of World War 1 we must also remember those who served in all the other 20th century wars and those still serving in our armed forces today”.

Among the other guests at the Lunch were the Mayor and Mayoress of Bexley, Cllr Brian Bishop and Cllr Christine Bishop, Bexley Council Leader, Cllr Teresa O’Neill, Bexleyheath BID Manager, Tony Garratt, Christchurch Vicar Rev Trevor Wyatt, and Deputy Lieutenant, Major David Hewer OBE. There were also many members of the British Legion and Veterans representatives, as well as community leaders present. The event was organised by the Club’s Secretary, Keith Manchanda OBE.