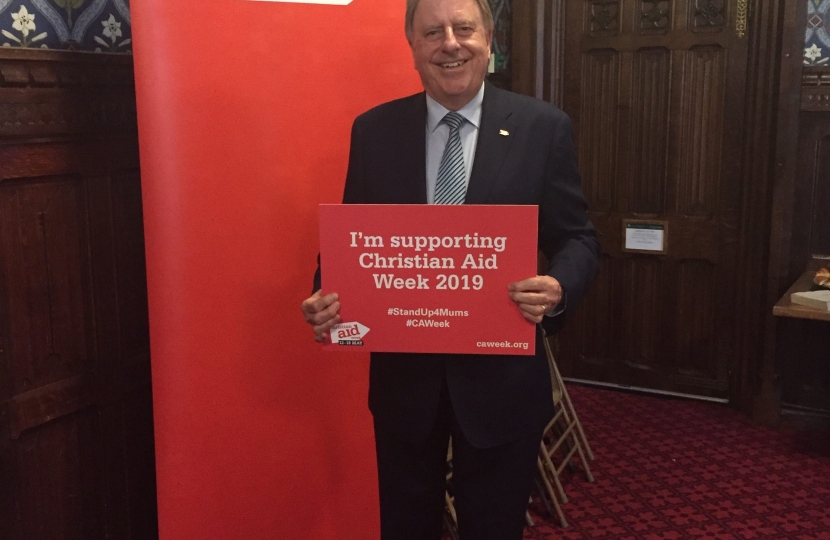 Rt Hon Sir David Evennett, MP for Bexleyheath and Crayford, attended a Christian Aid Parliamentary reception in Westminster Hall earlier today (15 May), to show his support for Christian Aid Week 2019, which is an annual door-to-door fundraising drive by the charity Christian Aid. It is held each year in Britain during the second week of May, when thousands of volunteers post red collection envelopes to households around the country.

This year the charity are focusing on childbirth in Sierra Leone as an example of what donations raised through Christian Aid Week could help fund through partners’ work worldwide.

Sir David is an active communicant member of St Paulinus Church in Crayford and is a strong supporter of Christian Aid. At the event today, he spoke with representatives from the charity about their campaigns, funds raised, and discussed his parliamentary question in the House of Commons yesterday to the Foreign Secretary on the persecution of Christians worldwide. During Christian Aid Week last year, in the Bexleyheath and Crayford constituency a total of £3,640 was raised.

The Prime Minister this morning set out our ‘New Deal’, an ambitious economic strategy to rebuild Britain across the UK, putting jobs, skills and infrastructure investment at the heart of our economic recovery post-coronavirus, and delivering on our manifesto pledges to level up the entire countr