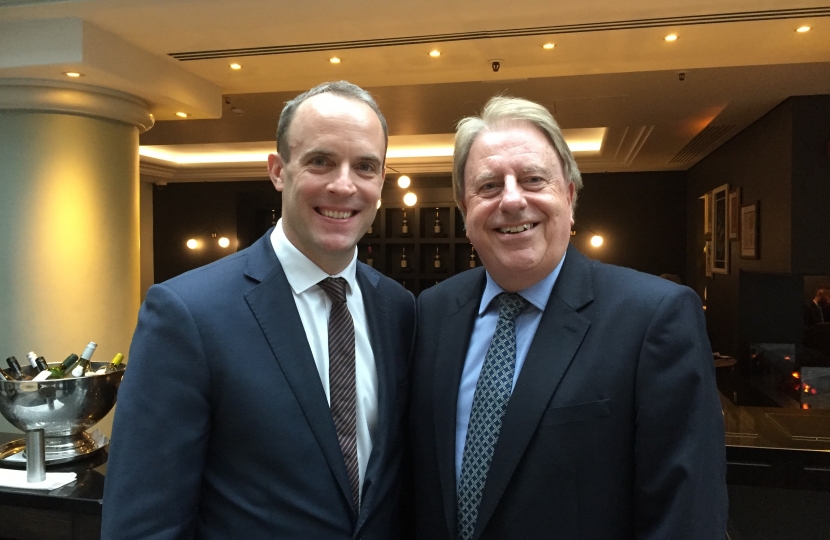 Rt Hon Sir David Evennett MP was one of six representatives from Bexleyheath and Crayford Conservatives to attend the Conservative Party Conference in Birmingham this week (30 September - 3 October).

Whilst in Birmingham, Sir David visited a number of the stall at the Conference to speak to a number of charities about their work and current campaigns, including the Royal British Legion, Alzheimer’s Society, Guide Dogs, Charities Aid Foundation.

Among other fringe meetings, Sir David attended the Conservative Policy Forum Reception. He spoke to a number of delegates about getting involved in helping shape the policies of the Conservative Party, and discussed his recent appointment as Co-Chair of the POLICY GROUP NAME. He also sat in on the panel discussion with Rt Hon Anne Milton MP, Minister for Apprenticeships and Skills, on reimagining our education and skills system.

Sir David also attended the Conservative Home event at which Rt Hon Boris Johnson MP laid out his vision of how the Government should tackle a number of domestic issues, before moving on to Brexit.

The Prime Minister attacked Labour and their disastrous proposals for our country, before presenting a plan the Conservative’s constructive plans for Global Britain post-Brexit.

Following the conclusion of this year’s Conference, Sir David commented: “this year was a very successful Conference with good Conservative policies put forward to ensure our great country will succeed post-Brexit.

“The Prime Minister, in her wide-ranging address, put forward a variety of policies, and in particular I welcome the freezing of fuel duty for a further year and the removal of the cap on how much Councils can borrow against their Housing Revenue Account assets to fund new developments.

“I also welcome the plans outlined by the Home Secretary, Sajid Javid, for our immigration system post-Brexit, in which we will no longer be constrained by the EU and will introduce a new British values test as well as strengthening English language requirements.”