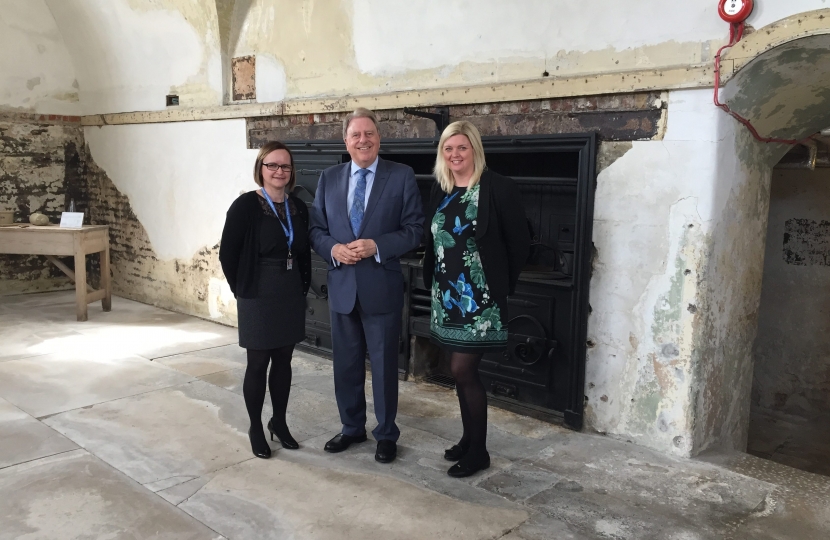 This is the eighth year English Tourism week has run and the aim is to raise the profile and showcase the benefits of the tourism industry to local communities and the economy. Tourism is one of England’s largest and most valuable industries. English tourism directly employ more than 2.6m people and generates over £106bn a year for the British economy.

Sir David was greeted by Anna Strange-Bennett and Jane Collins then given a tour of Danson House and learned about the restoration works and history. They are pictured in the old kitchen, which was the location of the mud bath scene in The Favourite – the film that Olivia Colman won the Oscar and Golden Globe for her portrayal of Queen Anne.

Earlier this week, Sir David also joined the Tourism Minister, Michael Ellis MP, in Parliament for a drop-in session in aid of English Tourism Week and to meet with representatives of the national tourist board VisitBritain/VisitEngland, to hear about the opportunities tourism presents for the economy.

Sir David served as the Minister for Tourism in 2016 and commented: “English Tourism Week is a fantastic opportunity to highlight the many attractions on offer, such as Danson House. I have visited Danson House on many occasions and was here for the reopening in 2005, but I was amazed to discover new facts today and to learn about the restoration works. I would encourage all of my constituents to pay a visit.”