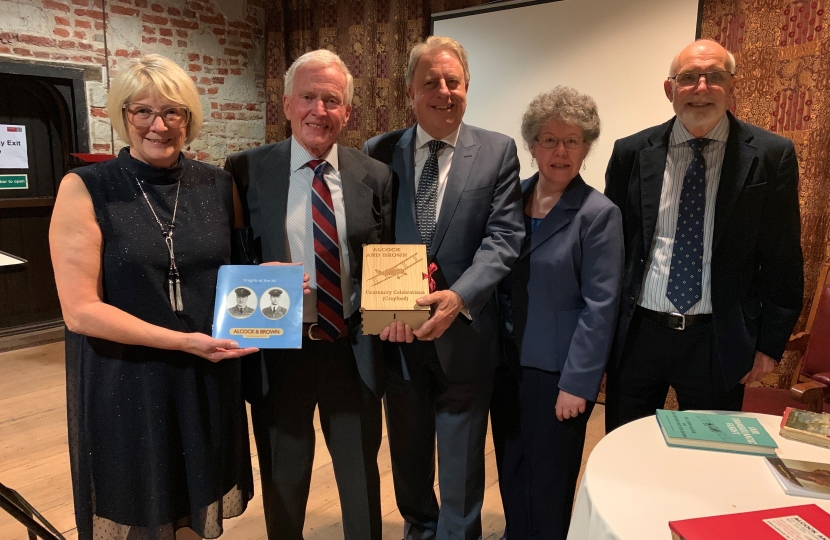 Group Captain Tony Alcock MBE, nephew of the flying hero Sir John Alcock, came to Crayford yesterday evening (16 April) to launch the Summer Centenary celebrations of the first and epic Trans-Atlantic flight in June 1919 by Alcock and Brown. He spoke about his uncle John and gave an interesting illustrated talk about Alcock and Brown and their successful flight from Newfoundland to Ireland.

The aviators Alcock and Brown flew across the Atlantic on 14/15 June 1919 in a modified Vickers Vimy plane originally built by Vickers in Crayford and tested at Joyce Green airfield. Sir John Alcock, pilot, and Sir Arthur Whitten Brown, navigator, visited Crayford in July 1919.

The Alcock and Brown Project Group (Crayford) has been led by their Chair, Cllr. Geraldene Lucia-Hennis, and the Secretary and Treasurer, Janet Hearn-Gillan, and they have organised a programme of events and activities in Crayford throughout the summer. They have been supported by a wide range of local historical and community groups, as well as the Lottery Heritage Fund and Bexley Council.

The Host at the event was Cllr. Geraldene Lucia-Hennis and among the many guests were Rt. Hon. Sir David Evennett MP and Lady Evennett, the Deputy Lieutenant of Bexley Major David Hewer OBE TD DL, the Mayor and Mayoress of Bexley, Cllr. Brian Bishop and Cllr. Christine Bishop, the Mayor and Mayoress of Dartford, Bexley Council Leader, Cllr. Teresa O’Neill OBE, and Cllr. Eileen Pallen. There were refreshments and memorabilia, including a model of the aircraft to enjoy, as well as the opportunity to chat with Group Captain Tony Alcock MBE.