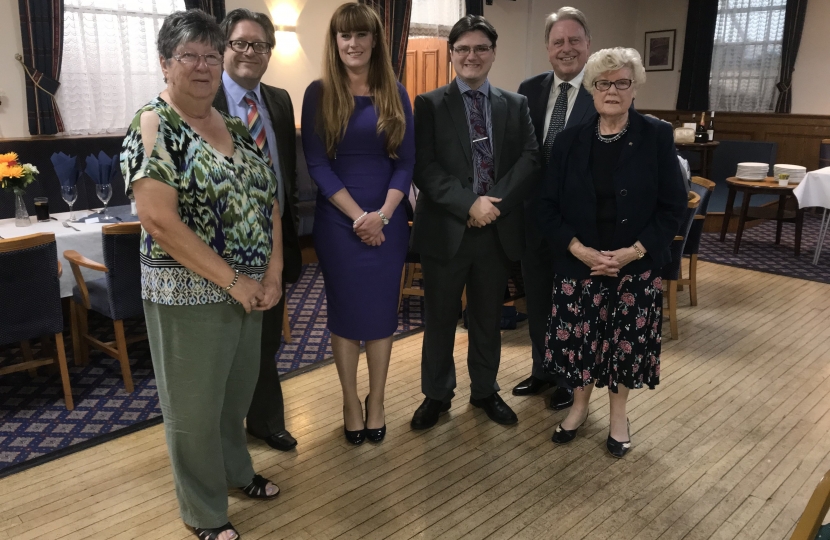 Bexleyheath and Crayford were pleased to welcome Parliamentary Under-Secretary of State for Small Business, Consumers and Corporate Responsibility Kelly Tolhurst MP for Rochester and Strood to their Summer Supper last night (27th June 2019).

Chairman Cllr Howard Jackson started by thanking everyone for attending the event. Kelly spoke passionately about her role as Small Business Minister having run her own business in Marine Surveying before entering politics. She gave attendees a positive and uplifting speech about our country's bright Post-Brexit future regardless of the eventual outcome and touched upon some of the exciting work being carried out by the government ready to take our economy into the future.

After the speech many members asked a number of questions and praised Kelly for her open and honest answers, upbeat presentation style and welcoming and friendly personality. Having already made many striding achievements in her 4 years in the House of Commons we can confidently call her a rising star of the Conservative Party and look forward to following her career as she progresses even further.

Rt Hon Sir David Evennett MP spoke of how he had campaigned for Kelly in both the 2014 Rochester and Strood by-election and the 2015 General Election. From his time spent as her whip in the House of Commons he was impressed from the start by Kelly’s strong work ethic and dedication to her local constituents. Kelly in turn thanked Sir David for the help and support he had provided her over the years both in campaigning and when she first entered the House of Commons

Our thanks and gratitude go to Kelly from everyone in Bexleyheath & Crayford for providing such a wonderful evening for all concerned.

Pictured above (Left to Right)