Welcome to the website of the Bexleyheath and Crayford Conservative Association. We're an active local association and we're here to help, so please don't hesitate to get in touch.

Our Member of Parliament is Rt Hon Sir David Evennett MP, who has served our area since 2005. 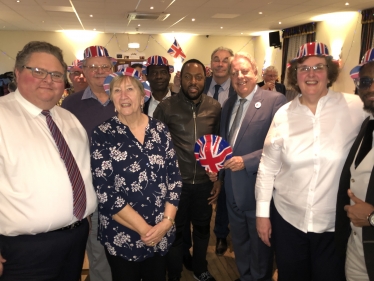 The three Conservative Associations in Bexley Borough joined together on Friday evening (31 January) to celebrate Brexit with a two-course traditional roast beef dinner at the Bexleyheath Conservative Club.

Organised by Cllr Teresa O’Neill OBE, Cllr James Hunt, Cllr Linda Bailey and Cllr Philip Read, the event was a sell out and members toasted Brexit and the Conservative Party under Prime Minister Boris Johnson MP, which had delivered on its Manifesto commitment to leave the EU on 31st January.

The three Conservative Associations in Bexley Borough joined together on Frid

We're Investing in Infrastructure across our Country

When we came to office we promised to unite and level up, spreading opportunity across the whole United Kingdom.

This map shows the extent of the geographical area that we represent on behalf of the Conservative Party.